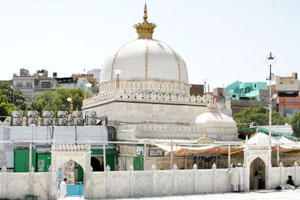 At the foot of a desolate hill in old part of town, this is one of India's most important places for Muslim pilgrims. The Dargah is the Sufi saint, Khawaja Muin-uddin Chishti, who came to Ajmer from Persia in 1192. Construction of the Shrine was complete by Humayun and the gate was added by the Nizam of Hyderabad. 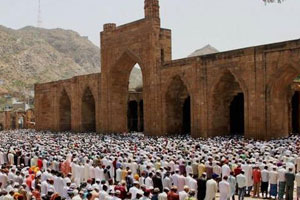 A remarkable structure, this is a masterpiece of indo - Islamic architecture located on the outskirts of the city, just beyond the Dargah As the legend goes, its construction took two and a half days (Adhai-Din) to complete. It was originally a Sanskrit college, built within a temple. 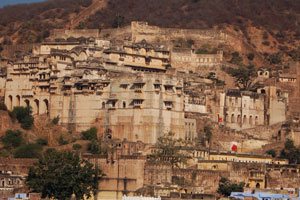 Taragarh, also known as Garh Beetli, is a circumvallation of the crest of the hill which overhangs the town of Ajmer and commands a view of it from every point. The principal strength of the fort lies in the ruggedness and acclivity of the hill. The space within the walls of this hill fort was about 32 hectares with several tanks. From 1818 to 1832 A.D., a company of Native Infantry occupied it, but the fort was dismantled in 1832 A.D., from 1860 to 1920 A.D., other accommodation on the hill was used as the sanitarium for the European troops stationed at Nasirabad. It is now in a dilapidated and forlorn state though the hill still commands a majestic view. 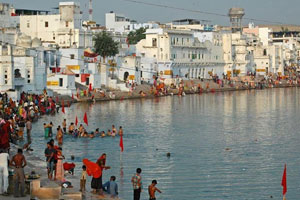 Pushkar Lake, considered to be sacred is said to cleanse sins and cure skin diseases with a dip. It is located in the town of Pushkar in Ajmer district and is the sacred lake of the Hindus. Historical significance of the lake is evident from the fact that it finds it’s mention on coins as early as the 4th century BC. Surrounded by 52 bathing ghats, the lake has been described by Hindu scriptures as 'Tirtha-Raj', meaning 'the king of pilgrimage sights'.